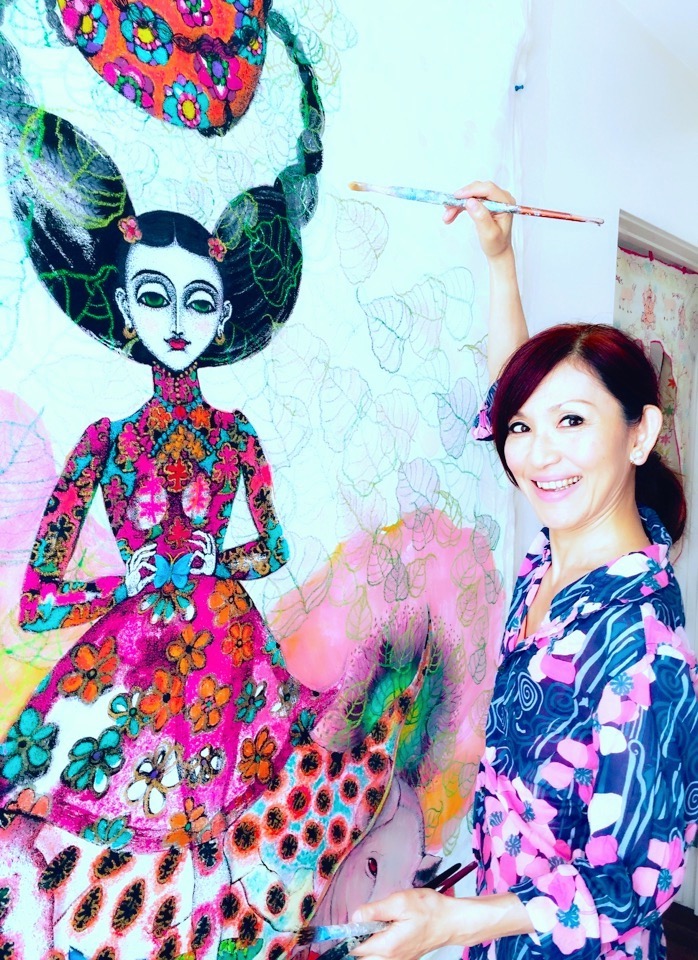 Rima Fujita was born in Tokyo, lived in New York City for thirty-two years, and now resides in Southern California. She graduated from Parsons School of Design with her B.F.A. and has exhibited her work internationally to much acclaim. Rima has collectors around the world including many high-profile clients. As a descendant of the Last Samurai her creative aesthetics is strongly influenced by the philosophy of Bushido and Buddhism.

Known for her distinctive style with vivid colors on black surface, Rima’s works are extracted from her dreams and meditation process. They are ethereal and evoke a timeless sense of longing and peace, and yet if examined deeply her images trigger a powerful ripple of infinite emotions. She is inspired by “Nibiiro,” an expression of a very dark grey color from the Heian period in Japan (AD 794 to1185). If you mixed all colors that exist in Nirvana, the Buddhist land of Perfect Bliss, it would become “Nibiiro.”

As a contributing artist for a popular cultural television program, “At the Garden of Wordsworth” and “Adventure of Wordsworth” for four years, Rima’s work became renowned nationwide, and she showed over 500 works on a national network throughout Japan.

As a prolific full-time artist she has produced over 1,000 pieces in the last twenty years.

Rima’s life passion lays in her philanthropic work. In 2001 she established “Books for Children,” an organization that produces children’s books and donates them to children in needs around the world. She has created 4 children’s books and has donated more than 12,000 books to the Tibetan children in exile. All profits go to support the Tibetan children’s education. H.H. The Dalai Lama, Desmond Tutu and Betty Williams, the Nobel Peace Laureates personally gave her special recognition in 2006 at the International Peace Summit in Japan. His Holiness The Dalai Lama calls her, “An artist who creates beautiful art.” Rima has won various awards internationally.

Her recent solo-exhibitions were held at Sundaram Tagore Gallery in Beverly Hills, L.A. Trace Foundation, New York and Isetan Art Gallery in Tokyo, Japan where she has exhibited her work every year for the past twenty years.

Her published books include: “Wonder Garden,” “Wonder Talk,” “The Little Black Box,” “Simple Meditation,” “TB Aware” and “Save the Himalaya.”

Documentary films made by: NHK, TBS Television and others.

We want to send you evites about the upcoming events!

We are going paperless, and we no longer will send out any materials by snail mail. If you would like to receive any announcements of Rima's upcoming events including her upcoming solo exhibition "Antariksa" in Tokyo (November 3 - 9, 2021) please fill out the form below. Thank you so much!