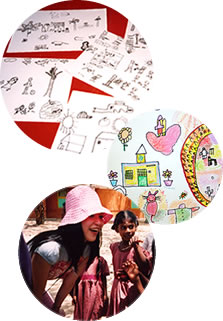 Our goal is to produce children’s books for the orphans and children of the countries in needs not only to help with their education but also to help them preserve their languages and unique cultures.
How It Started:

One night in the early 1990’s, Rima Fujita, the founder of BFC heard the voice in her dream exclaim, “You must do something for Tibet now!” Unfamiliar with Tibet, she began researching and learned that Tibet had been suffering under the harsh Chinese occupation since 1951. Millions of Tibetans have been killed and many others have followed the Dalai Lama who fled to India as a refugee. Thousands of refugee orphans live in exile in extremely humble conditions.
As an artist Rima decided to produce a children’s book for those Tibetan orphans and refugee children. In order to help them preserve their unique language and culture, she picked a folktale illustrative of Tibet’s rich culture and wrote the text in Tibetan and English. This first book is called “Wonder Talk.”
Having no budget for this project Rima collected funding herself and donated 2,200 copies of “Wonder Talk” to 81 Tibetan refugee schools in India, Nepal and Bhutan. In 2001 “Wonder Talk” was officially selected by the United Nations as recommended reading for educators around the world.

By 2015 BFC has created five children’s educational books (Wonder Talk, Wonder Garden, TB Aware, Save the Himalayas and Rewa) and has donated more than 12,000 copies to the Tibetan refugee schools in India, Nepal and Bhutan.

BFC would like to thank all the supporters who have helped make those projects happen. Thank you so much for your continuous support!